Since I’m feeling ambitious with more consistent sleep, I’ve decided to clean my apartment and get rid of some clutter.  I went somewhat minimalist a year ago, so there wasn’t as much clutter to get rid of this year.  After dusting what furniture I still have (I have decluttered enough I now need only one bookshelf, a tv stand, a couch, a chair, and an all purpose large table in my living room) I vacuumed the place entirely at least three times.  I have that lovely light beige carpet that shows dirt and dust real bad.  It’s a pain to keep clean.  Still have to work on my small kitchen.  I’m doing all of this cleaning now because our apartment complex is having a Housing and Urban Development (HUD) inspection next month.  In case HUD decides to check random rooms, the management here is inspecting all apartments in two weeks.  We had a preliminary inspection before Christmas.  All I really had was minor issues that could be remedied within a few hours of cleaning.  Just because I’m a bachelor doesn’t mean my place is as filthy as a Neanderthal cave.

With paranoid schizophrenia I am naturally a little concerned about letting people I don’t associate with regularly just look around my apartment.  With our preliminary inspection last month I didn’t know what our new manager would be looking for.  It usually takes one annual inspection before I know what a manager will and will not look for.  A previous manager didn’t like that I had “too many electrical cords” on my floor.  But they weren’t tripping hazards.  Another didn’t like that I had my couch against my living room window. Claimed it was a hazard in case the fire department had to come through my window. Another was a stickler about dust and carpet cleanliness.  I got hammered on the carpet because the carpet is probably thirty years old and has needed replaced as long as I’ve lived here.  Not even a Rug Doctor can save carpet that old.

It’s always been nit picking and moving the goal every time a new manager comes in.  I’ve always been annoyed by subjective standards that aren’t quantifiable.  That’s why while I liked doing one act plays and speech in high school, I didn’t care for the competitive end of it.  Seems to me the difference between bringing home first place and finishing dead last is the judges more than the actors or speakers.  One time my brother and his best friend did a humorous duet skit that was unbelievably funny. But they were doxxed by one judge at districts and denied a shot at the state tournament because one judge didn’t like that they made a passing reference to homosexuality.  But this was twenty years ago.  As far as speech and acting went, if my audience went home enlightened and entertained I felt I did my job. I never cared about any judge whose opinions and motives I can’t even guess.

I’m not worried at all about these inspections anymore.  The first couple years I lived here I was.  I was paranoid enough back then I thought I was on the edge of getting evicted at any time.  I didn’t know the rules to the game of living in low income housing and disability insurance I do now.  I have been around long enough to see that the only sure ways to get evicted in low income housing is to not pay your rent, break the law, or keep a house so awful it’s a health hazard.  So annual inspection one of those things that it’s just a minor inconvenience to be endured for a short time.  But that’s pretty much the sum of my last few days. 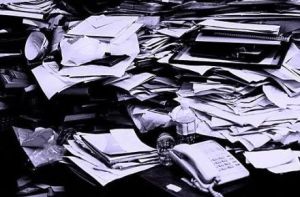 Years ago at one of my first jobs my supervisor made a remark about how disorganized my work space was.  I replied something to the effect “My work space is immaculate compared to Einstein’s.”  My supervisor replied “Can you imagine how much more he would have accomplished if he was half way decluttered?”  My boss had a point.

I am not a neat freak by nature, but I haven’t let my apartment get college frat house cluttered for several years. I found a middle ground.  If I say so myself, my place looks pretty good compared to some of the bachelor (and even bachelorette) pads I’ve seen.  Since I live in a complex with dozens of units, there is a minimum standard I have to keep at all times.  I’m not about to get evicted over something preventable.

One thing I have noticed since I became serious about health and exercise is that every aspect of my life has improved.  Everything from my finances, my appearance, my mental stability, and the cleanliness of my apartment have improved.  I have achieved a cleaner apartment through practicing minimalism.  Minimalism is really just getting rid of clutter and things I don’t absolutely need.  Last summer I took an inventory of everything I had in my apartment and looked at everything I hadn’t used in the last twelve months.  If it had been longer than that since it was used, it immediately went away.  It may have been given away to neighbors or it may have gone to Salvation Army, but it was gone.

I got rid of a lot of clutter immediately.  Books I hadn’t read, clothes I hadn’t worn, DVDs I could watch on Netflix or Youtube, CDs were backed up on my computer and thumb drives (I literally do not own any music CDs), decorations for holidays, all furniture except a dresser, a night stand, a couple chairs, a couple small couches, and light weight computer desk were gotten rid of.  Most of my ‘stuff’ was given away.  Some things like worn out shoes, flip flops, and socks went to the dumpster.  After this first round, my books with sentimental value, my classic literature books, and history books were kept on two tall book shelves.  I have gotten to where most of my reading materials are on my iBooks files.  I do have a short book shelf that serves as a stand for my printer and computer programs.

The second wave of the minimalist project involved giving away all canned food in my pantries I wasn’t going to eat.  I will not buy anything I know I won’t eat.  I don’t care if it is on sale.  I’ll pay a little extra if I know it will be eaten.  I had to get rid of most of my old clothing as I had lost a lot of weight.  I now have only ten shirts, three pairs of gym shorts, a couple pairs of sweat pants, a couple pairs of jeans, a couple dress shirts, a couple winter coats, and a couple light fleece coats for clothing.  That’s about it.  I also have only four pairs of shoes, a couple walking shoes, a pair of dress shoes, and a pair of steel toed boots.  I own four lamps.  Put in brighter energy saver bulbs and use more natural sunlight.  I got rid of most of my dishes.  I literally have maybe three plates, three bowls, four cups, and a half dozen spoons, forks, and knives.  I don’t even have a toaster or electric skillet.  If I want toast and pancakes, I go to the all night diner.

This sounds drastic, but it has simplified my apartment and my life. It has led to less stress, less anxiety, more peace, more contentment, and even better finances.  I no longer feel a need to buy stuff I don’t need to impress anyone.  No need to keep up with the neighbors.  The neighbors are probably more broke than I am even if they make more.  It’s because I don’t buy anything I don’t absolutely need.

I’m not done even yet.  I would like to eventually get all my books to fit onto one book shelf and get rid of the other shelf.  For those wondering how I entertain guests, there are literally dozens of restaurants, sports bars, parks, etc. in my small town that have furniture, food, HD televisions, and wifi.  I got to where I saw no point in having things I would use only a few times.

One thing I didn’t minimize was my emergency preparedness materials.  I still have first aid kits, flash lights, a crank up radio, etc.  If we get snowed in or flooded in for a few days I’m the guy who remembered toe nail clippers and a Swiss Army Knife.  Some things I don’t shirk on.

My mental well being and money situation really improved once I got rid of most of my clutter and quit looking for contentment in owning things.  It is such a good feeling to see how little clutter I have in my closets and on my floors now.  It’s a good feeling to have some emergency money.  It all gives peace of mind to an otherwise anxious and distressed schizophrenic brain.  If I can’t be organized in my mind, I’ll do it in my outer surroundings.

A blog about life

The creative journey to becoming an author

A blog full of tips, inspiration and freebies!

Writer, educator and philanthropist on a journey to discover what it means to live a life of purpose and well being

ruminations & travesties of the favorite yet naughty son of Nengkoy

Turning Your Passion Into Your Business

You are not alone

Things about mental illnesses, personal experiences, and maybe some advice to help paint a better picture and help people understand it better

Mental Illness,The Messiah, and Me

Where Mental Illness meets with God

The Anxious Teens of America

Because we’re in this together.

I don't blog until I had my coffee.