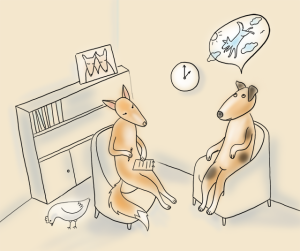 Been feeling pretty good for the last few weeks.  I haven’t had my traditional summer break down.  Hopefully I can get through the next couple weeks without any issues.  I usually start feeling better in early September with the passing of the warmest weather of summer.  I never have dealt well with the heat of summer.  I had problems with summer heat even before I had a mental illness diagnosis.  I have always enjoyed winter and spring more than summer.

It might help that I really haven’t been outside much this summer.  When I do exercise it’s usually walking the hallways of my apartment complex.  I didn’t go outside much this summer so I was never truly exposed to the heat and humidity.  I have driven less this summer and driving does sometimes cause me aggravation.  I definitely try to avoid driving anywhere when I’m going through excessive paranoia and depression.

I think the change in psych medications has helped me greatly this summer.  I was having flare ups every several weeks before I switched over.  Haven’t had any prolonged breakdowns since.  I switched over to a medication my DNA testing said would really benefit me.  I know I have been less physically active but I have also been more mentally stable this summer than previous years.  It’s a pity that I have to choose between physical health and mental stability.  But years ago my only options would be long term hospitalization with no way to alleviate my symptoms or homelessness.

In spite my previous problems I am still hopeful for the future.  Of the three medications I am currently on, two of them didn’t exist even five years ago.  The DNA tests that told me what medications would be most effective didn’t exist until recently.  When I was first diagnosed in 2000 we had to try medications at random and hope that something took.  We were wandering in the dark in that regard.  I am glad that I wasn’t born in 1930 instead of 1980 with this diagnosis.  Back then my only treatments may have been long term hospitalizations and electroshock therapy.  As it is I can essentially live alone, granted with a government sponsored disability pension and taxpayer sponsored medical treatment.  But it could be that this route is cheaper than long term hospitals like the 1950s.  Being on anti psych medication, having a small routine, having enough money to cover food, rent, and minor entertainment, living on my own, etc. is certainly more humane than being long term hospitalized, prison, homeless, or dead.  For most of human history I would have been dead with this illness before my 36th birthday.  As it is my worst problems now are occasional flare ups and my sleep apnea.  I am thankful for medical science and it’s advances.  I probably have a shorter life expectancy with this mental illness than I would normally, but I plan on staying around for awhile and seeing what I can accomplish in spite of this illness.

When I first applied for disability insurance ten years ago, I pretty much thought my life was over.  I thought I would be regulated to a short and brutal life of being anonymous, poor, tormented, and unknown outside of family and a few friends.  I didn’t plan on writing a blog about the experiences I’ve had over the years.  But even with this diagnosis I didn’t want to waste my talents.  I didn’t want my losing my shot at a career and a family to have been in vain.  I didn’t want this mental illness to destroy everything.  That’s why I blog as much as I do.  I suppose if I knew anything about making videos I would start a small youtube channel about life with a mental illness.  But that is probably a future project.