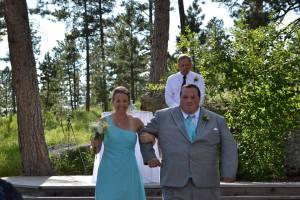 My college buddy Matt got married over the last weekend.  It was an outdoors wedding but wasn’t terribly hot as July in South Dakota can be.  While I was standing up with Matt I had to keep reminding myself not to lock up my knees so I wouldn’t pass out.  Matt was really nervous the morning of the wedding.  But I made it a point to not ask him if he was.  I must have heard at least ten people ask him about nervousness.  The wedding and reception went off well and there weren’t any true mess ups.  I posted a pic of myself in a suit even if I do look like Tony Soprano.

Mentally I held up better than expected.  Summers have always been a tough time for me so I was concerned going in.  But I just allowed myself to enjoy the few days away from the grind.  Got to catch up with old friends and made a few new ones.  Played multiple games of Jeopardy (I won a couple of those) and had a poker tournament the night before the wedding.  I lasted a couple hours before losing my $20 buy in but good luck getting out of a night club or concert with spending that little.  I think a night at the movies costs almost that much for one person.  Matt ended up making the most money of anyone in our eight person game.  Have fun with our money on the honeymoon Matt 🙂

It was a great few days out of my routine.  The weather was perfect for early July, the Black Hills were as green and beautiful as I’ve seen in years, and we had some great times.

2 thoughts on “My Buddy’s Wedding”